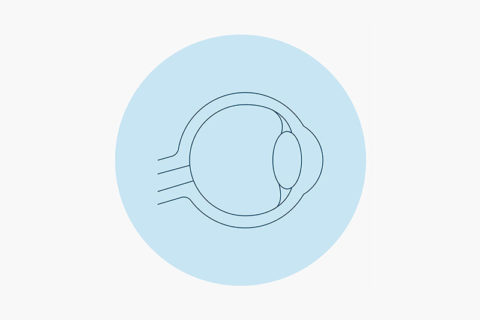 Glaucoma is a group of diseases that are generally distinguished by an increase in pressure inside the eye, which causes damage to the optic nerve. Interestingly, elevated eye pressure is not always noted however.

To understand glaucoma, one must first understand the normal circulation of the eye. The eye receives its nourishment from a clear fluid called “aqueous fluid” which is continually produced inside the eye. The aqueous is returned to the blood stream through the eye’s drainage “angle” between the cornea (the clear window of the eye) and the iris (the colored part of the eye). When the fluid cannot drain fast enough, pressure inside the eye begins to build. This excess fluid pressure pushes against the delicate optic nerve that connects the eye to the brain. If the pressure remains too high for too long, irreversible damage to the nerve and subsequent vision loss can occur.

Open angle glaucoma is the most common type of glaucoma, affecting 70 percent to 80 percent of those who suffer from the disorder.

Open angle glaucoma is the leading cause of blindness among adults in the United States and is particularly dangerous because it can progress gradually and go unnoticed for years. The disease usually affects both eyes. The only way to detect glaucoma before it becomes a serious problem is with regular eye examinations. These examinations will often include a simple, painless pressure test.

Open angle glaucoma typically occurs in patients over the age of 50, and the risk increases with age. African-Americans are at higher risk of developing the condition than Caucasians and, if there is a family history of glaucoma, the risk is up to six times higher than for the general population. Also, patients who are highly myopic (nearsighted), are at increased risk.

Another form of open angle glaucoma is called low-tension or normal-tension glaucoma. It is not known why, but patients with this condition are found to have normal eye pressures. Nonetheless, they go on to develop optic nerve damage and vision loss just like patients who have high eye pressures.

Open angle glaucoma cannot be cured, but it can be controlled by lowering the pressure in the eye, with the use of eyedrops, laser or surgery.

In most cases, if medications are successful in controlling the eye pressure, they will be continued for the rest of the patient’s life, and regular use according to a physician’s instructions is absolutely necessary to maintain control of the disease.

A “narrow angle” is an eye condition where the iris (colored part of the eye) is too close to the drainage angle of the eye. The iris is at risk for being drawn into the angle, totally blocking any drainage and resulting in angle closure glaucoma. In contrast to open angle glaucoma where the visual loss is often quite gradual (generally occurs over months to years) and the eye pressure elevation is generally mild, angle closure glaucoma can result in vision loss over minutes to hours due to the exceedingly high pressures that occur. This excess fluid pressure damages the delicate optic nerve that connects the eye to the brain. Rapid and irreversible vision loss can occur if treatment is delayed.

Because drainage from the eye occurs normally up to the point when the drainage angle becomes blocked, most patients who are at risk for angle closure glaucoma (i.e. those with narrow angles) have normal eye pressures and no symptoms prior to an attack.

Patients at risk for angle closure include those who are farsighted, those with small eyes, and some patients with cataracts. Patients found to have narrow angles should avoid cold remedies which contain Pseudoephedrine, Phenylephrine or Neo-Synephrine; anti-histamines like Chlorpheniramine, Diphenhydramine or Benadryl and overactive bladder remedies such as Detrol. These medications can narrow the angle further and lead to an attack of angle closure.

Angle closure glaucoma is a true medical emergency. Fortunately, it is often preventable if patients at risk are identified and treated prior to an acute attack. An eye examination is necessary to establish the diagnosis and determine one’s risk for this condition. Should you experience any of the symptoms of angle closure as described above, it is imperative that you see your Eye MD (ophthalmologist) immediately to prevent/limit vision loss from this potentially blinding condition.

We have experts in lasik and other forms of refractive surgery. The East West Eye Institute also has experts in the fields of glaucoma, corneal disease and oculoplastics. We utilize advanced laser technology to treat conditions such as diabetic retinopathy, various forms of glaucoma, and secondary cataracts.